MY SWEETHEART OF FIFTY YEARS

My Sweetheart of Fifty Years 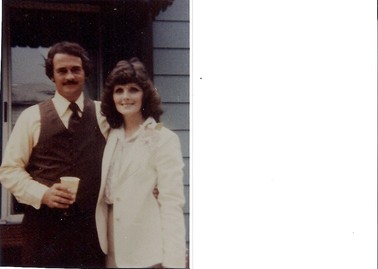 Written by: Kay about her love AL

When I first saw AL, we were in Noble Park. I was almost 16 and he was 17. We dated for a while and after 6 months we thought we were in love so we ran off and got married. I knew I wouldn't have my mother’s approval, that was Jan. 30, 1959. A lot of our friends at that time were getting married young.

A lot of them didn’t make it very long. AL was so cute he had sort of a bad boys image and me having to be home at 10 pm and only and only allowed to date one night a weekend, I thought he was really “cool”.

What I thought was true love was nothing compared our long marriage, which our love grew even stronger the older we got. The first few years were rocky, he wasn’t as ready to grow up as I was but with hard work and both of us willing to try harder we made it through, by the time we had 2 little girls.

When he got sick in the 90’s and finally in 1993 had open heart surgery, I thought my world was coming to an end. I wasted so much time and precious hours worrying all the time about him instead of taking it a day at a time and enjoying that day.

It took me a long time to accept the fact that God holds us all in the palm of his hand and only He knows when He is taking us home.

I really didn’t think I could live if he died before me.

We faced some sorrowful times together; the death of my Dad from suicide in the 80’s and our precious granddaughter at 18 in 2007. Having each other with God’s help we made it through those horrible times.

In January 2009, we had our 50thwedding anniversary and he felt so bad because of the ice storm, we had no power, we were having it rough.

When he was down I always tried to cheer him up. So I told him “Just how much more special could an anniversary be – the National Guard is all over Western Ky. & Jim Cantori came to town, just how many people get all that on their anniversary”, and he
began to smile.

I thank God for my special memories every night, one in particular. I always walked AL to the door when he left & would wave at him, he would always stop and hold up one finger and point at me, that meant I was still number one in his heart and I know without a doubt he knew I felt the same.

AL will be gone 4 years March 24, 2013 and I still turn back the covers on his side of the bed and turn his pillow oblong, then I get in on my side and hold on to 1 little corner of
his pillow to say my prayers before I go to sleep. I will always keep his pillow.

The hardest day of my life was when I had to leave the hospital the last time and he couldn’t come with me anymore.

I was trying to be strong for my three girls and grandkids wasn’t easy but I knew God would help me get through it. I could hardly make my feet move, they felt so heavy walking to the car, each step was a struggle.

Someday when the Lord calls me home, I pray that AL’s eyes will be the first I see when I get to heaven.

Even when people see me alone, I really am carrying AL in my heart everywhere I go, but only I can feel his love.

Melt butter & margarine in pan on medium heat. After butter is melted and sugar, stir constantly, bring to boil and continue to stir for 2 minutes. Pour over graham crackers slowly.

Bake in oven for 10 minutes. Allow to cool and break in pieces.